Is Jamplay or GuitarTricks better for learning guitar in 2023? Let's have a look!

Deciding on which one to join can be a bit tricky, since they are both very similar in so many respects.

This is where a side-by-side comparison between GuitarTricks and Jamplay will come in handy, but first, let's discuss the history of these sites to get a better understanding of what they can do for you.

Disclosure: The reviews written on this site are carried out by professionals, who receive compensation from the companies whose products get reviewed. We test each product thoroughly and recommend only what we believe to be the very best. We are independently owned and the opinions expressed here are our own.

It's important to know that GuitarTricks is the older site, established in 1998. As such, they practically invented online guitar lessons.

JamPlay is the follower, who is set out to overtake the pioneer, as can be seen from the video editing quality, innovations in online guitar learning, and the rate at which new lessons are added to JamPlay.

Now have a look at this handy Jamplay vs Guitar Tricks comparison table below, to find the nitty-gritty differences between the 2 sites in 2023:

As you can see, both websites are very similar, but you can still find differences beneath the hood.

How are Jamplay & GuitarTricks different?

After comparing GuitarTricks.com and Jamplay.com with the help of the table above, you'll notice that the main differences between the sites are:

Let's have a look at a few more things that I noticed while using both sites, these may be of interest in your decision as well.

There are a few things I really enjoy on GuitarTricks.com:

And of course, there are always things you would change:

No matter which membership level you sign up for (monthly or yearly), you can ask for a refund within 60 days of your payment, and GuitarTricks will send the money right back onto your account, no questions asked.

Yes, you can get a discount at GuitarTricks by signing up for their yearly membership option or using a discount code. They also have a 2-week free trial option.

As with GuitarTricks, there are a few things that are especially cool with JamPlay:

And for the ugly:

Each lesson has a comments section, where you can post your comment, and the instructor will generally reply. Artist-instructors don't reply.

Also, there is the live session thing JamPlay has, which I don't really like, but you can chat with the instructor in real time. He/she may or may not reply, since other people are writing him simultaneously.

The refund period with JamPlay is 30 days. You have 1 month to test the site and see if it fits your needs.

If you choose to get a refund within this time period, you email them and they send your payment back, no questions asked.

Yes, JamPlay has discount codes that you can use to save a few bucks off their membership prices.

So, is GuitarTricks or Jamplay better?

Objectively speaking, I would say that GuitarTricks is better for learning guitar. Some may agree, some not. Read my reasoning below, and leave a comment if you agree/disagree.

The reason why I think GuitarTricks is the winner versus JamPlay, is because:

But then again, JamPlay does have a cool scale library tool (which is great for intermediate-advanced players), the production quality of JamPlay videos is generally higher (the educational value is about the same), and they release more new lessons and mini-courses in different genres for intermediate-advanced guitarists, which might make them a better choice if you're an established player.

You be the judge, take your pick. You could even sign up to test both, and just get a refund from the one you're least satisfied with.

And remember to save some money!

Go to our posts on the Guitar Tricks discount and JamPlay coupon code before you sign up.

Learning to play the guitar from beginner guitar books is still huge in , despite the availability of the more modern form of learning guitar, online video tutorials. The “learn guitar books” (both acoustic and electric) are here to stay since thousands of guitar lesson books are sold daily. For this reason, I thought I would buy,…

Learning to play guitar is one of the best decisions you can make in life, but getting to the point where you can actually play whatever you want will take a bit of time and effort. However,  you can greatly reduce the time and difficulties of the learning process, by choosing the study method most… 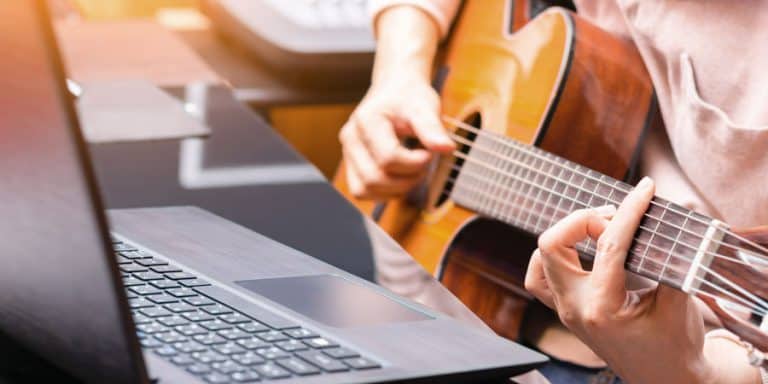 With online video guitar lessons becoming a viable alternative to in-person lessons, the price of guitar lessons has significantly decreased for beginner and advanced guitarists alike. While in-person guitar lessons cost between $30-$60 per 45-minute session, you can sign up on a number of high-quality websites and receive online lessons for next to nothing. Here…

I just read a review of Blues Guitar Spotlight from the makers of Learn and Master Guitar, and decided to write a post about it since I know from experience that Legacy Systems (the makers of the courses) always brings out very high quality educational material. They just released a new DVD based lesson package…

If you’re at all serious about learning to play the guitar, you’ll already know the secret to advancing your skills. Practice, practice, practice. Saying it is actually easier said than done. You need to, first of all, make the time, and you also need to come up with a suitable practice routine, that will develop…

Have you been seeing ads for an app called Yousician popping up everywhere? I have! The Yousician ads looked pretty interesting. Guitar Hero mixed with a real guitar on your phone. So being a curious guitar teacher, I wanted to see how Yousician teaches guitar. Here is what I found. What is Yousician? Yousician is…