You might not know that GuitarTricks was the first ever online video guitar lesson site. Things have really developed since then, not just on their site, but all across the Internet.

They've been busy, and it really shows. They've managed to build a huge database of video lessons, both dedicated courses, and lately, specific guitar songs.

This week, they hit the 500 song lesson mark. Now that's a lot! Check out the songs here.

To celebrate, they are having a pretty big promotion, here are the details.

If you buy an annual membership to access their video lessons for $129, you can choose to get a nice bonus gift, anything from the list below:

The song list is pretty impressive as well, I don't know of any other site online that has this many lessons. They have songs from artists, like:

Their video lessons are great, even though they don't have animated tablature like my lessons, but hey, you can't have everything.

You might not know that I am a huge advocate of learning to learn to play through learning songs. Of course, you need to learn the very basics at first, so things like how to hold the guitar, and how to read tabs and chord charts.

But after this, I believe every beginner guitarist should start learning songs straight away. Why?

Because learning guitar is hard, but playing songs is fun. Aiming to play a song, even if it's a very simple 3 chord strumming song will give you an extra boost of motivation, that boring exercise drills just can not. This is coming from 10+ years of experience teaching beginners, so I'm pretty confident I know what I'm talking about.

Lots of people want to play guitar, but only a few actually make it. I've had many "restarting" students, so people who learned at one time already, but quit. Out of those who had a previous teacher, they pretty much all said that it was too hard and boring, but my method, that of learning songs, is much more interesting.

When someone decides to learn to play, they basically have one goal in mind. To play songs to themselves and others. It's as simple as that. And since there are loads of very popular songs that beginners can learn, I really don't know why all teachers don't start with them.

All right, sorry about the rant, so let's get back to GuitarTricks's 500 songs. Here is their list of songs, you can see that they cover a lot of artists and popular songs: GuitarTricks song list >>

They also have 2 versions of a few songs, one for beginners, and the other the full version. I think it's a great time to get access to GuitarTricks, all the songs and the free gift makes for a great offer.

Hello to all my esteemed students! First off, I want to wish you all a Happy and Successful New Year. I wish I could say it to all of you individually, but this is the next best thing. As a little twist on my usual post covering the most viewed lessons of the previous month,…

Hohoho, Merry Christmas to all of you. JamPlay is celebrating the holiday season again by offering a nice discount to new guitar students, who sign up for an annual membership. They do this every year, so if you sign up now, and like the site, you’ll probably be able to take advantage of the cheaper… 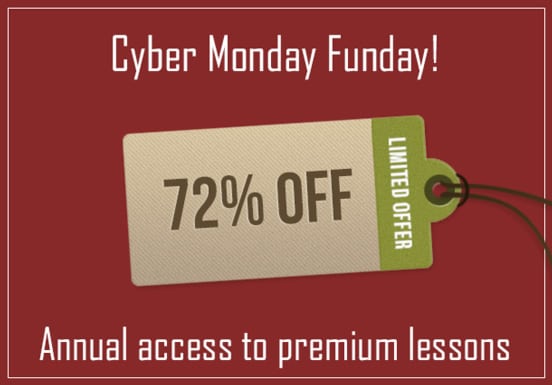 Take advantage of this once per year sale, and get a massive 72% discount off of a 1 year premium membership to TheGuitarLesson.com.

For just $29 for the year, you’ll get access to all of the high quality video guitar lessons on our site.

You will quickly advance your guitar skills by learning songs from popular artists.

I have 2 very exciting things to announce today, both of which have been in the works for some time now. Actually, longer than I would have liked them to, but as a good friend once said Slow work takes time… Yes it does 🙂 1. New design of the video lessons The design of the…

Hi Everyone, In my continuous effort to make the streaming of our video guitar lessons as fast as possible and retain the quality of the videos at the same time, we have once again re-encoded all of our lessons. This time around, instead of using .flv (flash video) format, we’ve encoded to the newer mpeg4…

The Holidays are here again 🙂 This time of the year means different things to different people, depending on your religion, your upbringing, where you live, and in general, the kind of person you have become over the years. What the Holidays means to my family For myself, becoming a parent (4 years ago and…