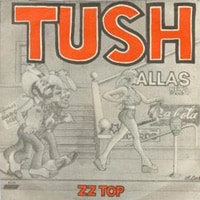 Genre:
Skills: 12 bar blues, Blues shuffle rhythm, Palm muting, Power chords, String muting
You have great taste for learning Tush, good for you 🙂 This classic blues-rock song should be made compulsory for all guitar players, there's just so much to learn from this song. It's basically a 12 bar blues song in the key of G, played the ZZ Top way. There are lots of things going...

ZZ Top is a three-person American blues-rock group formed in Houston, Texas, in 1969. The band members are Billy Gibbons on the vocals and guitar, Dusty Hill as the bassist and backup vocalist, and Frank Beard on the drums. Hill and Frank spot long beards and never miss Stetson hats.

ZZ Top entered the airwaves with smash hits such as “Tush” and “La Grange” and albums such as Tres Hombres, Deguello, and El Poco.

The band’s initial musical style was wholly blues, but it has evolved to include southern rock and hard rock throughout the years. Their music mixes Texas humor, lifestyle, and sexual innuendos with an iconic sound based on Gibbons’ rock-blues guitar style and the base rhythm.