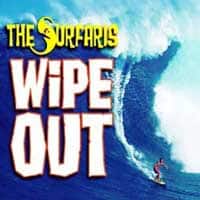 Wipe Out
The Surfaris
Level:

Genre:
Skills: Alternate picking
Wipe Out is a really energetic song that’s pretty easy to grasp hold of. As you can see, this guitar lesson will give you a chance to practice alternate picking across adjacent strings, which is a skill you MUST master to advance as a guitarist. You’ll be using alternate picking in every song you play,...

The Surfaris were a surf rock band from the early 1960s. They are best known for their hit song “Wipe Out”, which was written by guitarists Jim Fuller and Ron Wilson.

The Surfaris were one of the first bands to play guitar-driven surf music, and they helped popularize the genre. The band’s guitar playing was heavily influenced by Dick Dale, and they often played fast, energetic songs that were perfect for surfing.

The Surfaris disbanded in 1966, but their music has been influential to many subsequent surf rock bands.