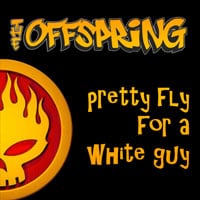 Pretty Fly For a White Guy
The Offspring
Level:

Genre:
Skills: Guitar notes, Multiple string slides, Power chords
Pretty Fly (For a White Guy) was a huge hit back when it was released, mostly due to the comedic, satiric nature and well-made music video. Lots of people know the song, which makes it an awesome song to learn since your audience will recognize it instantly. It is a relatively straightforward song, not that...

This American rock band was formed in Garden Grove, California, in 1984 with original members Peter Parada on the drums, Todd Morse as the bassist, and Kevin “Noodles” Wasserman and Bryan “Dexter” Holland on the guitars. Dexter is also the band’s vocalist.

They have had a career spanning four decades, released ten albums, and underwent several changes in the lineup. They specialize in punk rock, pop-punk, alternative rock, skate punk, and melodic hardcore genres. Together with Green Day, they are recognized for getting people interested in punk rock again in the ’90s.

The Offspring has sold more than 40 million records worldwide. Some of their hit songs include “Come Out and Play,” from the Smash album, “Pretty Fly (For a White Guy)” from the album Americana, and “Hit That” from Splinter.