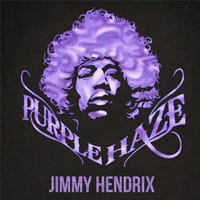 Genre:
Skills: Hammer-ons, Octaves, Open chords, Slides, Strumming patterns
During his short life of 28 years, Jimmy Hendrix became a musical legend for all of eternity. He was a very influential and widely respected guitarist with a unique personality, and all guitarists owe it to him and the art of playing guitar to learn at least a couple of Jimmy Hendrix songs. Purple Haze is an...

Jimmy Hendrix (1942-1970) is regarded as one of the greatest electric guitarists of all time. Surprisingly, his career lasted only four years from 1965 before coming to an abrupt end in 1970 due to his untimely death. Still, he is among the most celebrated 20th-century musicians and is enshrined in the Rock and Roll Hall of Fame.

Jimmy got into music in 1961 after being discharged from the Army. He played little gigs throughout the upper Midwest, Southern and Eastern U.S. He even toured with the Isley Brothers and Little Richard, and several other groups before going on his own in 1966. Songs such as Hey Joe and The Wind Cries from his first album, the Jimi Hendrix Experience, catapulted him to the world stage, charting top 10 in the U.K. He was a rock, blues, R&B, and psychedelic rock whizz.