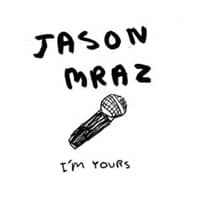 Genre:
Skills: Barre chords, Double stops, Multiple string slides, Muted strumming, Strumming patterns
I’m Yours is Jason Mraz’s most famous song, it’s the song that brought him true fame and fortune. And for good reason I believe, there are few songs that hit such a sweet balance of everything you need to create such a laid-back super hit. In today’s guitar lesson on I’m Yours, we’ll be learning...

Jason Mraz is a Grammy-winning singer-songwriter who first came on the scene in 2002 with his hit single, The Remedy. Since then, he’s released several studio albums.

Jason is known for his positive lyrics and upbeat songs, which often incorporate elements of jazz and pop. He’s also an accomplished guitarist, and many of his songs feature impressive guitar work.

In these tutorials, we’ll take a look at some of Jason Mraz’s best guitar songs. So whether you’re a fan or just looking to learn some fun songs to play, you’re in a great place.