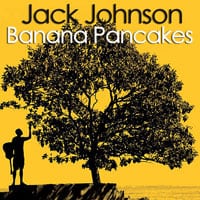 Genre:
Skills: Barre chords, Ghost strum, Percussive slap, Strumming techniques
Banana Pancakes is a very cool, mellow acoustic piece that’s you’ll love playing, and if you (or someone you know) can sing along to it, then that will make it even better. „In Between Dreams”, the album this song was released on, reached the top of the charts in a number of countries and rightfully became...

The American artist, Jack Johnson, boasts a lot of talent. He’s a singer-songwriter and plays multiple instruments, he is a record producer, professional surfer, and documentary filmmaker. He achieved commercial success in 2001 with his debut album, which he called Brushfire Fairytales. He was the primary musician (guitar, vocals, and piano) on the album.

His musical style is acoustic pop, rock, folk-rock, and reggae.