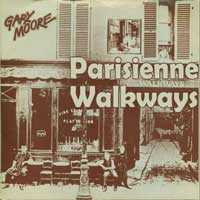 Genre:
Skills: Open chords, Slides, String bending, Vibrato, Vibrato while string bending
I truly believe the intro solo to Parisienne Walkways is one of the greatest guitar solos of all time, maybe even the best ever. This is subjective, but for me, the emotions that Gary Moore put into it each time he played the song just mesmerizes me. To tell you the truth, I’ve heard this song...

This Northern Irish music virtuoso was a blues, jazz fusion, and hard metal specialist. He played in many different groups between 1960 and his untimely death in 2011, at age 58. Music lovers still remember him by his greatest songs, such as Parisienne Walkways, and successful albums, such as Still Got the Blues.

Some of the groups Moore performed with include Skid Row, with which he recorded two albums, and Thin Lizzy, with which he worked with Phil Lynott. But it wasn’t until 1970 that he began a solo career, alternating between heavy metal and hard rock with varied amounts of international success. His last album, Still Got the Blues, was released in 1990. He continued to collaborate, record, and release new music during his later career, sometimes even collaborating with different artists.

This Northern Irish bluesman influenced many artists and is considered one of the best guitarists ever.