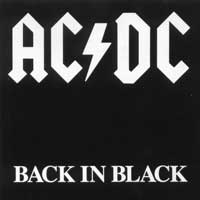 Back in Black
AC/DC
Level:

Genre:
Skills: Muted strumming, Open chords, Power chords, Pull-offs, String bending
Well, I think it is needless to say that you chose a great song to learn since you’re already here 🙂 Back in Black is an all-time classic rock song, that is just amazing to play on your electric guitar under distortion. You'll be learning the song in detail with our electric guitar lesson, so...

The rock band AC/DC was formed in Sydney in 1973 and comprised Malcolm Young and Angus Young, two brothers from Scotland. Their music style can be described as heavy metal, hard rock, and blues-rock, but the brothers themselves will tell you they are a rock and roll band.

AC/DC guitar riffs and solos are some of the best of classic rock, and the band’s techniques are as fresh and valuable today as they were when the band first started.