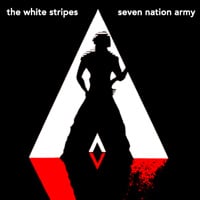 Genre:
Skills: Minor scale, Palm muting, Power chords
This song is a real treat for beginners who play the electric guitar because it is really easy to play. Granted, The White Stripes made it their thing to compose simpler melodies, but Seven Nation Army was their most famous song, exploding them to stardom. Our guitar lesson on 7 Nation Army will teach you how...

While The White Stripes may not be one of the most well-known bands, their raw and gritty guitar riffs are a favorite of my guitar students.

But first, a bit of history. The White Stripes formed in Detroit in 1997 and rose to prominence with their 2001 album, White Blood Cells. While they only released six studio albums throughout their short career (they disbanded in 2011), each one was met with critical acclaim.

Each of their albums had its own distinct style, and you’ll get to learn some of their most popular guitar songs with the lessons on this page.