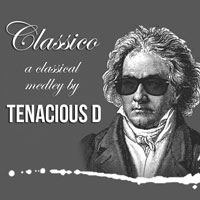 Genre:
Skills: Arpeggios, Barre chords, Hammer-ons, Open chords, Palm muting, Pull-offs, Strumming patterns, Trills, Vibrato
Classico is a fairly unknown song by Jack Black and Kyle Gass of Tenacious D, but I really like it since it incorporates classical music into modern-day rock guitar. I like to refer to this piece as a classical medley since it features their interpretation of 3 classical songs: Bach's Bourrée in E minor, Für Elise by...
8:51 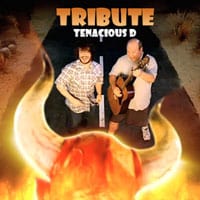 Genre:
Skills: Accented strumming, Hammer-ons, Muted strumming, Open chords, Power chords
Tribute is a really fun song to play, as it is energetic and vibrant. The intro features an interesting riff with consecutive hammer-ons centered around a given chord, so it’ll give you a chance to practice the hammer-on technique while holding down a chord. After the intro, you’ll learn several chords, some of which you probably won’t...

The comedy rock duo Tenacious D’s origin dates back to 1994, Los Angeles, California. It was created by Jack Black and Kyle Glass, and they quickly became known for their acoustic rock style with lyrics that talk about contemporary issues with satire. The band’s name comes from Marv Albert, an NBA announcer who used the phrase ‘tenacious defense’ quite a lot.

Tenacious D has had a cult following throughout the years. Their first single titled Tribute was released to rave reviews, earning them fans in the US, the UK, and Australia. Other hits by the group include Beelzebus, Time Warp, and Wonderboy. Their style alternates from comedy rock, heavy metal, hard rock to acoustic rock. They’ve also worked with great acts such as Foo Fighters, Train wreck, and Dave Grohl. Kyle is the band’s guitarist, while Jack is the vocalist.