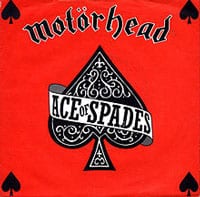 Genre:
Skills: Fast plucking, Power chords, Unison bends
Today, we’ll be learning Ace of Spades, a fast-paced, energetic song by Motörhead. Structurally, the song is super simple, since there are 4 main parts to it, which are played in a specific order. But technically, Ace of Spades is pretty difficult, due to the speed at which it is played (285 BPM). If you...

Learn Motörhead songs on the guitar

If you’re a fan of Motörhead, then learning a bit about the band’s history is a must. Did you know they were formed in 1975 by bassist and vocalist Ian Fraser Kilmister, better known as Lemmy? He was joined by guitarist Larry Wallis and drummer Lucas Fox, but the lineup would soon change. After just a few rehearsals, Wallis left to be replaced by Eddie Clarke. The classic Motörhead lineup was born.

And what about their guitar songs? Any true fan should know at least a few of their classics. So let’s take a little trip down memory lane and learn how to play some of their most popular songs on guitar.