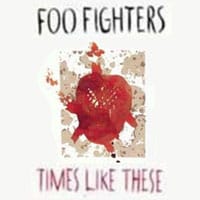 Genre:
Skills: Chord changes, Ghost strum, Open chords, Strumming patterns
The acoustic version of Times Like These is basically an acoustic cover of the original song by the Foo Fighters, since the original used the entire band, and was played on the electric guitar. The acoustic version is played and sung by Dave Grohl. The reason learning this song is a great choice is that you'll be...

Foo Fighters are one of the most popular rock bands of the past few decades. Though they’ve experienced lineup changes and stylistic evolution over the years, they’ve always remained at the forefront of hard-hitting guitar rock.

Their music is full of catchy hooks and memorable riffs, and these lessons will teach you how to play some of their most iconic songs on guitar.

Whether you’re a diehard Foo Fighters fan or just getting into their music, these songs are great for any guitar player.