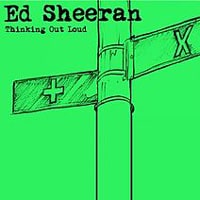 Genre:
Skills: Percussive slap, Picking patterns
If you enjoy doodling around on your guitar, you are going to love today’s lesson. The groove you learn with Thinking Out Loud along with the special strum technique can really take you places. The guitar chords to Thinking Out Loud are simple open chords, nothing special. There is just 1 barre chord. If you are...

Ed Sheeran took the world by storm in 2011 with romantic hits such as “The A-Team” and later “Thinking Out Loud” that gave fans strong Marvin Gaye vibes. Since then, he’s had multiple successes with albums that have earned him Best British Male Solo Artist, Grammy, and Ivor Novello awards.

But before he was the international man of melodies, Sheeran posted his music on YouTube. He began his career in 2004, at just age 14.

Sheeran’s style is hip hop, folk-pop, and pop. He has a wide vocal range, and he’s a great guitar player, songwriter, producer, and music arranger.