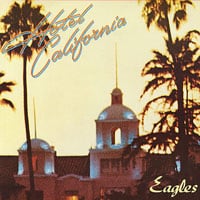 Genre:
Skills: Accented strumming, Arpeggios, Capo, Chord alterations, Chords
Hotel California was a Grammy Award-winning hit at the end of the ‘70s and is still one of the best-known songs in the world. To learn how to play this cover of the song, you’ll be needing a guitar capo, so if you don’t have one yet, I suggest you buy one now at your local...

Today we’ll learn some of the best songs from the Eagles, one of America’s most iconic musical groups.

The Eagles were formed in 1971 in Los Angeles, California, and they quickly became one of the most successful bands of the 70s. They are known for their signature sound, which combines elements of rock, country, and folk music.

The Eagles have sold over 150 million records worldwide, and they are one of the best-selling American bands ever. You’ll find tutorials on some of their most popular songs on guitar on TheGuitarLesson.com, so grab your guitars and let’s get started!